When unfathomable tragedy occurs in our world, fans have come to expect entertainers to reach out to their fan base and address these events through social media, interviews or music. Comedians, radio personalities, actors, musicians, and tv talk show hosts alike are begged to use their influence to express their concerns. Whether right or wrong millions of fans hang on the word of their favorite celebrities.

Whenever an athlete speaks out on something such as police brutality they’re immediately rebuked for it. Instead of applauding the athlete, fans will tell them “Stick to (insert sport here), not political statements,” as if being a professional athlete somehow equals absence of intelligence. It incorrectly assumes that the gift of their athletic ability precludes their ability to exercise their first amendment right. Many of these individuals parlayed being great athletes into college scholarships. If they decided to leave school early, they took summer courses and graduated at a later time. For example, NFL players such as Ben Roethlisberger, Emmitt Smith, and Troy Polamalu went back to school in the offseason and finished their degrees. In the NBA, popular names like Shaquille O’Neal, Michael Jordan, and Vince Carter made time to graduate college. Curtis Granderson, JJ Putz, and THE Bo Jackson are part of the short list of MLB players (34) with a college degree. Contrary to popular belief, there is a large group of professional athletes dedicated to not only their specific sport craft, but also their education.

Athletes have just as large if not bigger platform on social media as other non-athlete celebrities. Even before the internet and smartphones existed, black athletes were welcomed by the Civil Rights movement and they actively did their part to stand up for what they believed in. Pioneers like Muhammad Ali, Kareem Abdul-Jabbar, Jim Brown, Bill Russell, Jackie Robinson, Joe Louis, Kurt Floyd, Hank Aaron, Paul Robeson, Althea Gibson, Wilma Rudolph, Dick Allen, Curt Flood, Craig Hodges, Magic Johnson, Arthur Ashe, Tommie Smith and John Carlos, all of them did precisely that. These activist legends all fought to make a change and their impact is still felt today. They fought for integration in their sports, battled constant racism at games and events, protested against wars, religious views, job growth, HIV/Aids advocacy, plight of POC in general, and women’s rights as well. 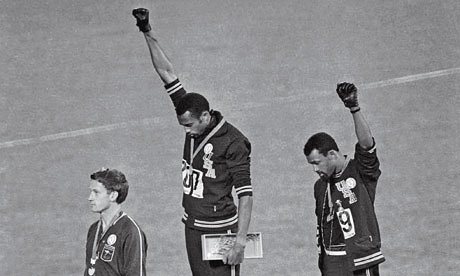 Superstars today have those pioneers to thank for greater equality in sports and endorsements. Nowadays athletes have a wider platform from which to speak, thanks to social media. On any given day, a fan could see their favorite player or runner post pictures, videos, and tweets creating conversation on social issues. LeBron James tweeting or posting pictures talking about Tamir Rice, Philando Castile, or Trayvon Martin reaches the world faster than ever before. Serena Williams can watch a video of a police officer killing an innocent black man and tweet about her anguish and it could be reposted and retweeted by millions of people – it’s more effective than holding press conferences. Athletes across the board make the political statements: they wear shirts with slogans on it, make political gestures, or attend protests. Although it can be controversial to do so, athletes at all levels can and do make statements. Whether high school, college, or professional these gifted people have the right to free speech to spark changes. To expect or allow only certain celebrities to address socio-political issues and attempt to hush the voices of athletes is simply un-American. Some of these athletes, having grown up surrounded by a measure of plight and violence themselves and having achieved despite the odds against them may be equipped with a heightened ability to relate and convey a message that is stronger and more positive than others. Not saying there aren’t actors or musicians or entertainers who have lived in the grime of the country, but there shouldn’t be any exclusivity in who gets to say what.

At the end of the day, everyone must recognize that we live in a scary world. Of course all lives matter, there isn’t a single human life that is not precious. However, to say All Lives Matter is like taking away the voices of people who are still fighting to be treated the same as everyone else. The whole Black Lives Matter movement started because black lives are being taken away and black families are being destroyed due to a political system and culture that has created fear and hatred for black lives.No lives matter until people of color can stop worrying about being accosted and aggressively approached solely based on their appearance. No lives matter until hate groups are eradicated. Everyone’s opinions and perspectives, including those of the athletes must be respected and listened to in order to create a new system that welcomes equality for all men and women.